This year also marks the 50th anniversary of the Beatles’ US Invasion.

AFA Las Vegas inside the Fashion Show mall has a special unveiling today to commemorate his life.  Stop by after 5 p.m. to see it firsthand.

Lennon gave the world music, inspiration, and most of all, love.

For living his life so generously and openly; thank you.

“I’m not afraid of death because I don’t believe in it. It’s just getting out of one car, and into another.”

“If everyone demanded peace instead of another television set, then there’d be peace.”

“Count your age by friends, not years. Count your life by miles, not tears.”

Adam Zielinski Films Nightwing: the Series and Life is Beautiful

The acclaimed Las Vegas director on the kick-start success of Nightwing: the Series.

After seven years since leaving a suburb outside Reno, director Adam Zielinski is proud to call Las Vegas home. He is a graduate of UNLV and a leader of the flourishing film community having Life is Beautiful, Zappo’s Chief Happiness Officer Tony Hseih and Mike Tyson for TIME Magazine in his ever-rolling credits. Adam has won many accolades including praise for his music video in the Las Vegas Film Festival. Now, we are relaxing at the Beat coffeehouse downtown as he spills his one of his newest challenges: Who gets to wear the Nightwing costume for Halloween?

How did you get involved with Nightwing: the Series?

This is a Vegas-bred project. With the exception of the composer, almost all of us are from UNLV or Las Vegas. Danny Shepherd and Jeremy Le are the creators. Domenica Castro was brought on as the producer and she recommended me. We’re all friends and fans. Nightwing is Robin after stepping out from the shadow of Batman based from DC Comics.

We shot for 17 days all in Las Vegas with a total of under $30,000. We shot in the Ogden, the Mob Museum, the Juhl, MG Studio’s green screen and on location in some downtown alleys. The Arhat Orphan Bros did the stunts and have been receiving popular reviews. The support and energy from everyone in the city was amazing. I think we all cashed out all our favors we had.

Danny Shepherd and Jeremy Le made Batman: Nightwing vs. Redhood before the Dark Night Rises premiered. It reached 1.6 million hits and they proceeded with demand and passion. Their first idea in mind was just two thousand dollars but then asked kickstarter for twenty thousand. We ended up with thirty-four thousand dollars.

Our kickstarter trailer built off global support, belief and love for Nightwing. We had a base of global comic fans. IGN posted it and it grew from there. DC owns the characters and universe. We aren’t doing anything commercial with it. It’s just a really produced fan video that everyone can see for free on YouTube.

Your first full episode premiered Monday, September 29th, 2014 with a red carpet. What did that feel like?

We premiered at the Palms Theater. It was 270 seats of cast and crew; friends and family. We showed the fifty-minute whole series. It was incredible. So many people helped. It was a great way to finally show them what they had worked so hard to build. The series is made up of short webisodes in a five part mini-series style and will be released on YouTube every Monday for the next four weeks.

If you had to opportunity to do this again with the knowledge you have now, is there anything you would change?

Nightwing: the series is a super-hybrid that ebbed and flowed from friends making something fun to professional style that was something of the highest caliber. We wanted to give fans a higher quality experience. There are always things you could do differently, but given the circumstances and budget I think we did the best we could and the whole team is really proud of it. 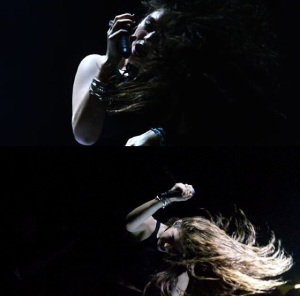 Lorde returned to Las Vegas at the Joint inside the Hard Rock Hotel September 30th, 2014. Doors opened at 8 p.m. to the raw emotional sounds of Majical Cloudz, a Canadian duo dressed in the distressed t-shirt and jeans rock star uniform.

Songstress Lorde was at home on the famed stage. She made a sweet remark about how the Kings of Leon had performed where she was standing. Her genuine innocence is as refreshing as her organic dance moves! Lorde did not disappoint, letting herself loose with the music and her signature untamed mane.

The crowd was entranced by beautiful music the whole night. Some light special effects, like a fog machine, surrounded a new Kanye West cover. All the favorites from the Pure Heroine album were included with Royals saved for the final third of the show. Despite the song’s lovable lyrics, we all put our hands up in the air for Lorde.

Ran Duan from the Baldwin Bar in Boston, Massachusetts won the global final at the 2014 Most Imaginative Bartender national competition. Along with permanent bragging rights, Ran will be featured on an upcoming cover of GQ Magazine.

The event took place September 10th, 2014 at XS in Las Vegas, Nevada, the nation’s number one nightclub according to the annual Nightclub & Bar Top 100. Sister-club Surrender featured the after party where contestants and brand executives celebrated over Bacardi bottle service.

Spectators were able to taste and vote for their favorite Bombay cocktail of the night. The mixes boasted creative names such as the Ornament in Crime by Tacy Rowland of Colorado and the Empress of India. The First Love by Robin Kaufman of Canada won the people’s choice award.

My favorite was an inspired take on the classic lemon drop martini that featured a fresh basil sprig, a slice of dried blood orange and a sugar rim. The flavor profile was delightfully balanced and well executed. Promotional models handed these to attendees after the Bombay Sapphire blue carpet. The concoction was hand poured from a silver shaker into the glass, dissolving a fluffy golf-ball sized edible in the middle of the martini. I wish I knew more about this drink!

Four Quotes on Passion and Life

A 10-seat sushi bar in a Tokyo subway seems like an unlikely place to have one of the best meals of your life. However, this is exactly where 3 star Michelin review and Japanese national treasure Jiro Ono meticulously crafts the finest bites to ever please your palette.

David Gelb’s documentary, Jiro Dreams of Sushi, allows us to spend a short time as one of Jiro’s inspired apprentices. We discover that Jiro’s lovely lessons of sushi transcend the kitchen and overflow into life. Here are four wise axioms from the world’s best sushi chef.

“You have to love your job. You must fall in love with your work…I feel ecstatic all day. I love making sushi.”

“We don’t care about money. All I want to do is make better sushi.”

“Each ingredient has an ideal moment of deliciousness. Mastering the timing of sushi is difficult. It takes years of experience to develop your intuition.”

“I do the same thing over and over, improving bit by bit. There is always a yearning to achieve more. I’ll continue to climb, trying to reach the top. But no one knows where the top is.”